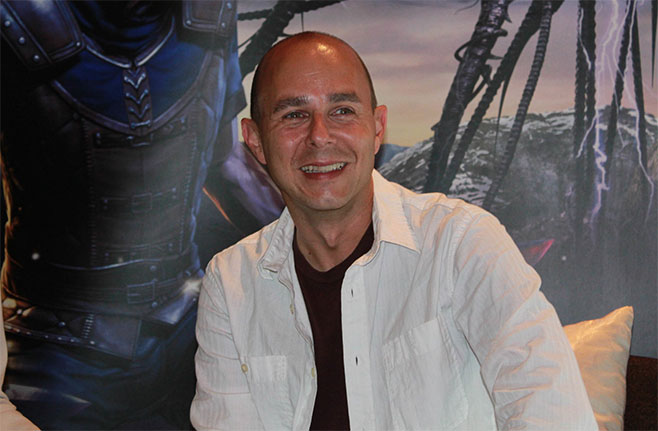 Greetings, thanks a lot for this amazing opportunity!

Already five years have passed for the RIFT. How would you assess this big milestone?

It’s truly humbling.  I recently started playing the game again over the 2015 holiday break, and I was amazed that after spending years both working on it and playing it, how quickly I got re-engaged, hardcore.  There were always a lot of different things to do in RIFT, and over the years the team has gotten even better and better atlining up new things to do in the game to keep it fresh and interesting.

What is your best memory about RIFT?

I have a lot of very powerful memories related to RIFT.  Here’s one I haven’t shared much:

The first time we ran our first Alpha test, we were just hoping that people would enjoy the game at all.  (When you’re the one making the game, you only ever see the flaws.  Our perspectives are always skewed.)   You’re never certainwhat’s going to happen until real people actually arrive.  Hearing the near universal reaction of: “This alpha is cleaner than most launches” was a massive emotional boost to all of us on the team.  That sentiment early on really drove us hard to work harder than ever to deliver the best game we possibly could by launch.  There was a universal sense on the team of: “Wow.  We love this community!  We need to do everything we possibly can for them.”

I made a lot of personal friends during its alpha and beta who I remain very close with to this day.

Are you happy with the new economic system, somewhere between a subscription and a free-to-play model?

We’ve learned a lot since the big changeover in 2013.  We’re always trying to find the right balance between providing the greatest amount offree things we possibly can, and making sure we have enough money coming in to invest in both the present and future of RIFT. That balancing act is always a challenge, and we learn more every day. 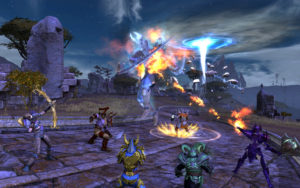 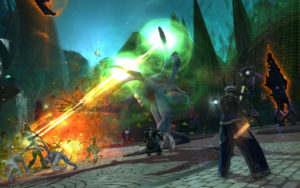 If you could change or improve something in this system, what would it be?

I’d spend more time making sure we’re engaging with our players so they can understand the why behind some of our decisions.  And then making make sure we get more time to have more two-way conversations with them to come up with solutions that work for both their happiness and our development budgets.  We want to keep their game being one of the best supported, AAA F2P games in MMO history.  That’s a big push for our dev and community leadership right now, in fact.

We want everyone to be happy with, or at least understanding of, why we do the things we do, across all of our games.

What was the hardest project to develop so far?

There are so many.  The team that worked on the F2P conversion did amazing work, and doing that while a game is live is exceedingly difficult.  The way the game works with the streaming downloader remains one of the best technological achievements in any MMO.  And we’re even pushing forward with more today: The multicore support to take advantage of more modern CPUs is a huge achievement as well.  Adding that type of ultra long term project, in a running game, is essentially unheard of in MMOs.

Next step now: 10 years! What are the priorities for the team in order to achieve a great and long lasting game, for the next five years?

Doing better at honest, legitimately two-way communication with our communities, as I mentioned above.  That leads to smarter decisions for both the players as well as the devs.

We were very good at this when RIFT was our only game in the company.  Over time as we added more games (six now), it’s become a lot more challenging.  We need to push hard to find a way to make it work better at this scale of having more games, and rebuilding the community team over the past year has been a great first set of steps down the path to success there.

Is it difficult for an "old" MMO like RIFT, which aged well, to survive within the game industry, where players are now playing multiple games? What are your strengths to let Telara survive in this difficult world?

Live games have always had that challenge.  Thematically, we want to make sure that the things we’re adding over time continue to have relevance far into the future.    In RIFT in particular we’ve tried to evolve based on lessons that some of us have been learning since the first generation of MMOs, blended with the newer exuberance of our younger developers.  It’s a great mix.

With our events, with Instant Adventure, with both automatic mentoring (temp level down) and sidekicking (temp level up) – those all make sure that all content has relevance to practically everyone at all times, no matter if we released it in 2011 or 2016.

How would you describe the RIFT community? Are the players providing the developers with enough feedback to work with in order to improve the features and gameplay?

I love playing the game with them.  The feedback is constant, for sure, and our dev team enjoys working with them too.

Will you add a new French representative (and German) in the future for your games? We don’t have any French person to refer to. It was an incredible community experience when we had Taome and Yakkah, and this would foster the community to share and discuss more about RIFT.

I agree – That too was more of a possibility for us when we had only one game, and an entire company all working on the same project.  We do continue trying to figure out better ways to serve all of our global communities better, though in a F2P world (where, say, 7-10% of the players ever pay money for anything, compared to 100% of the players providing monetary support)  I’ll be totally transparent here – providing an equivalent level of support globally does become increasingly challenging.  I think we can be doing more things (exactly like this conversation), though, to help make sure that people are aware we legitimately do value all of our global players very highly. 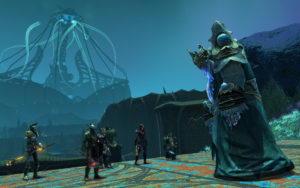 Are you planning on doing some cross-promotions between RIFT and Atlas Reactor?

We’ve had some pretty hilarious ideas internally. J  I don’t want to spoil anything here, but we’ll see which of them come to fruition !  One thing is for sure, we’re always looking out for ways to reward people who enjoy more than one game in our ecosystem.

Many players are wondering about RIFT starting to dive into the Pay-To-Win format; As an example, we can unlock new gear slots, only thanks to the store. Could you please share your thoughts about this?

Happy to.  We went too heavy on the theme of “FREE FREEFREE ALL IS FREE ALL THE TIME” mantra through the initial years of RIFT’s F2P lifetime.  That gave people the impression that “never paying anything, for anything” was a way that games could thrive.  That’s not the players’ fault – that’s our fault.  It’s obviously not mathematically possible.  Investing in the day to day operations as well as future large projects (like multicore, like new expansions, and so on) requires significant resources.

Then, with changes like the earring slot, we went too far in the other direction, and we did so without clear two-way lines of communication.

So the balance we need to end up with is: What is the healthy amount of things people are willing to invest in for new content, in a way that helps keep RIFT the best supported F2P team in the world?  Is it more like a DLC model for larger content drops, or is it something else?

Recall that we gave away an entire dev team’s two years of work, in the full blown expansion, Nightmare Tide, for literally no required cost.  That made a lot of people happy, but it’s obviously not a sustainable way of doing business.

Finding the right balance going forward is vital for us to work through with our communities. We know they want to support us, we know we want to keep creating the best game possible for them, and we have to make sure to be on the same page as they are in terms of the ways they’re happiest to provide us with that support.

We truly appreciate your time on this interview, may the world of Telara lasts!

Great to talk with you.  To an enduring Telara for many years to come! 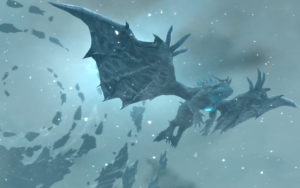 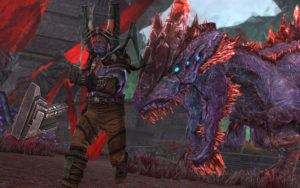 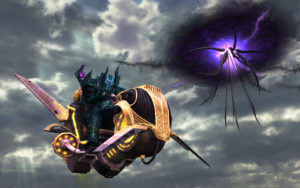 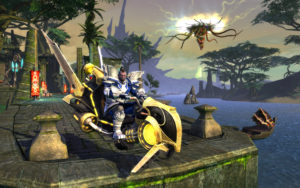 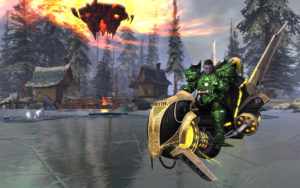 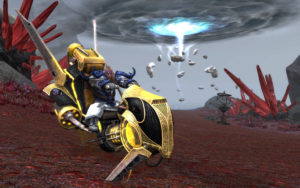 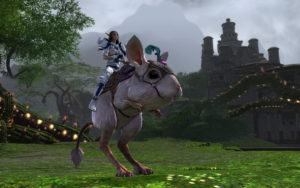 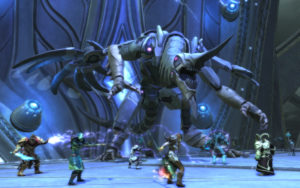 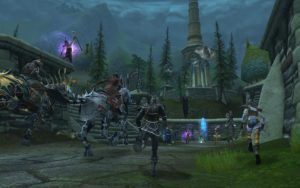 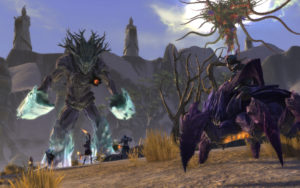 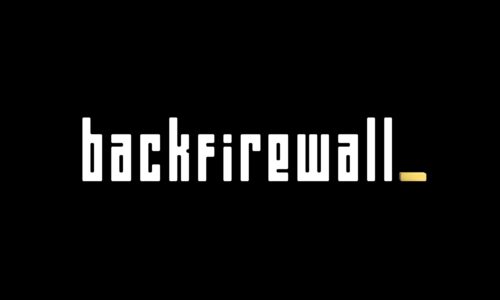 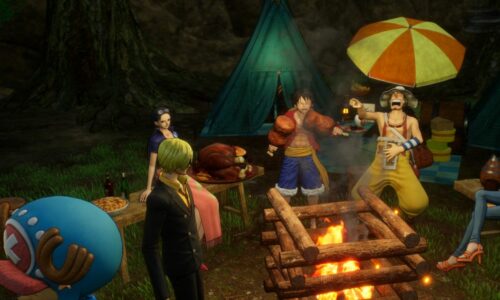 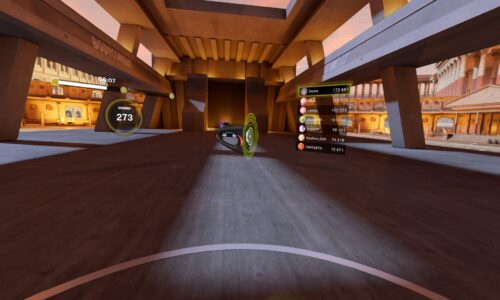