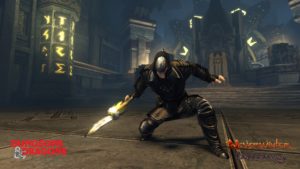 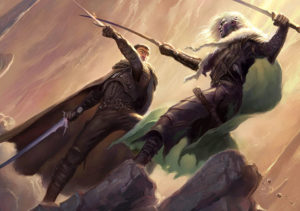 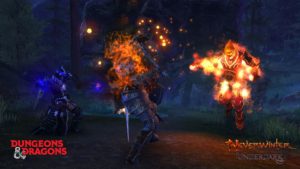 Thanks a lot for this opportunity. Could you introduce yourself and your job?
Sure! My name is Scott Shicoff and I’m the lead designer on Neverwinter. I came onto the project when Cryptic decided to bring the game to Xbox One, and I was the design lead on that. Once that went live, I transitioned over to the team proper.

It’s nice to see Drizzt and his company in the game. Did you play to Dungeon & Dragons before? Are you a huge fan of the Forgotten Realms?
I am, indeed! In fact, my group just finished running through Hoard of the Dragon Queen and we’re just getting started on Rise of Tiamat. We all rolled up a party of Dragonborn “siblings” (we were raised together) and are having a blast going through that story. We’re looking forward to Out of the Abyss once we’re done with this module.

What is your favorite class to play?
In Neverwinter, I tend to run a Paladin. In tabletop D&D, I almost always end up playing a Fighter of some kind. In my current game, things went a little bit differently. My wife wanted to try D&D (she’d never played any tabletop game like this before), and she wanted to roll up a Monk. To help keep her alive, I made a Cleric.

You are trying to follow the lore but you created a snail as a mount. I got a lot of negative feedback on this creation. Why did you decide to do this snail?
There are all kinds of interesting and unexplored facets of D&D. We thought it would be fun to have this magically-affected creature running through the world. We’ve received a bunch of positive feedback, but it’s true. that it’s not something normally seen.

How was working with R.A. Salvatore? Was it difficult for him to jump from books to videogame?
Working with R.A. Salvatore was fantastic! He was an amazing collaborator and of course, these are his characters, so he knows them better than anyone. Salvatore is very familiar with writing for video games, and he moved effortlessly between the mediums. It was a pleasure to use his creations in this upcoming module, and we got extra satisfaction in seeing his reaction when we showed him his characters brought to life in-game.

Do you plan to do something to help players without a guild to play more of the content?
All of the quests created by R.A. Salvatore can be solo-player adventures. If you’re talking about Strongholds content in particular, those are features that are designed specifically for guilds. If you mean queued content (or content you play while leveling), none of those things require a guild to participate. We’re always looking for new ways to create content that is engaging for both single players and groups.

It’s unusual for a MMORPG to add a MOBA-style map. How did you come up with this idea? What was the main challenge? Unlike other MOBAs, the balance shouldn’t have been as difficult because all players have the same base power.
The designer that was tasked with creating this content was given a set of goals (large-scale PVP between guilds, for example) before he began. He felt like a MOBA-style game in this setting would be a lot of fun, and we agreed. The biggest challenge was figuring out how you take a game where a MOBA is not the expected norm, and massage it so it feels natural and appropriate. We had to decide what kind of space was needed, what players were fighting over, how the scoring worked, how long the game should go, etc. As it was a new type of experience for us to build, there were a lot of unknowns. Any time you make something so wholly new for your game, there are a lot of unexpected things that pop up along the way.

From your perspective, what is the main feature for the new module Underdark?
It’s hard to say what the single main feature is, as it takes a number of components to complete a module. For this module, we’re introducing new replayable content, a new campaign, a large-scale battle against the Demon Lord Demogorgon, and quests written by R.A. Salvatore. We’ve also added the ability to visually preview gear, a massive rework of the Tarmalune Tradebar Store, plus a new plot location and PvP tower for Strongholds.

Have you already talked about the opportunity to add a subscription?
We have discussed it, but we’re not looking to make this a subscription-based game. We have, however, introduced a VIP system that provides convenience and added benefits for players who wish to participate. It’s not required, and none of the content is gated behind it.

Thanks a lot for your time. If you want to add something, please do so:
My pleasure! We’re really excited to have players experience the new content in the upcoming module. We hope they enjoy fighting side-by-side with Pwent and others, and are looking forward to seeing them help drive back the demonic spawns escaping from the Abyss!